I was not planning on seeing this, but after all the critical acclaim it has gotten I would be remiss if I did not check it out. When I first saw the trailer I was not a fan at all. Not of the content, but more so of how it was put together. The editing for the trailer was very disjointed, and it just felt like it had too many of the typical horror tropes. While it does have those tropes throughout the film, they are used in more of a satirical way, which actually worked quite well. So at the end of the day, does this film deserve all the praise it has been getting? Well, yes and no. It is a very good film that I enjoyed quite a bit, but it is by no means a fantastic piece of cinema.
Now you’re in the sunken place.
The best way to describe this film (in my opinion) is to compare it to an episode of The Twilight Zone. It has a message and uses an almost supernatural method of conveying that message. In this films’ case, the topic of race (specifically Black race) is tackled. It is handled remarkably well. The film never feels too preachy about it, plus there is an interesting twist to how race is used in this as well. The plot itself is fairly straightforward and mostly predictable. 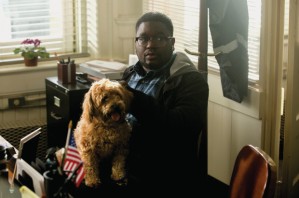 Funniest part of the film.

There are one or two parts of the film that surprised me, but for the most part I was where the film was going. This is not bad necessarily because I had a blast getting from point A to point B. However, I cannot help but imagine how much more engaged I would have been if I truly had no idea where the film would go. The acting and writing in this film are both top notch. The dialogue felt purposeful and the actors behind the spoken dialogue did a great job bringing it to life. The standouts in this film are: Daniel Kaluuya and Lil Rey Howery. Both are great for two very different reasons. David had to convey so many different emotions throughout the course of the film and he did so very well. There is something about his performance that just felt very natural. As far as Howery, he stole every scene he was in because his delivery of all his lines was perfectly timed and absolutely hilarious.
I’m T.S… motherfuckin’-A.
Tonally this film is also well balanced between the funnier moments and more serious ones. Everything progresses fairly well up until you get to the enormously satisfying third act. As far as my problems with the film, I already mentioned the predictability of the plot. Again, it is not a major negative for the film, but it would have been refreshing to see something that could literally go anywhere.

The film also starts off a bit rough. It takes a little bit of time to really get going, but I will admit after watching the film entirely the beginning of the film did not bother me as much. Finally, and perhaps most importantly, I did not find the film particularly powerful. Perhaps this is because everyone else hyped it up so much, but while it is a really good film there was not anything in it that truly resonated with me and left a lasting impact.
Closing Remarks
Despite having to pee throughout most of Get Out I persevered because the film had me hooked. Is it the best film in recent years? No, but it is a very good film with so much going for it despite a few bumps in the road. If you watch it make sure you see it with some friends, it is a great “crowd-pleaser” type of film.