If you ask me, the DC Extended Universe has only had one major misstep, which is Suicide Squad. I like Man of Steel quite a bit, and Batman V Superman is not all that bad (the extended cut is actually pretty good). However, each of those films are rather polarizing. Some people seem to like them while others resent them. With the release of Wonder Woman I was not sure what to expect. The trailers look good, but familiar to the rest of the DCEU films. I was going in expecting the worst (despite reading countless positive reviews) and came out thinking that this is a very good film and a nice step forward for these DC films.
I will fight, for those who can not fight for themselves.
Right off the bat, my favorite parts of this film are the quieter moments. Unlike many recent comic book films, Wonder Woman actually slows down in a few parts and really lets you know the characters. The two scenes that stick out is the scene where Diana and Steve are on the boat, and when they are in the village at night. Those two scenes really stuck out to me because they had sharp dialogue and great acting. I was so invested in those scenes, not because of explosions or a fist fight, but because of how the characters interacted with one another. I felt like I learned something about them. 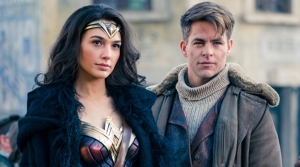 Moments such as these are not featured frequently in something like a Marvel film (I promise this is the only time I will compare the two), but if the upcoming DC films can provide more moments such as these I believe they will slowly begin to surpass what Marvel is doing. The main reason why Wonder Woman works so well is because you care about her and understand why she does what she does. The most recent DC films have concerned themselves so much with building up the world, they overlooked the characters that are featured in their films. In this film, while there is minor world building, the main focus is on these characters and their own struggles. I was not a huge fan of Gal Gadot’s portrayal of Wonder Woman in Batman V Superman, but this time around she does a very good job. Her comedic timing was excellent, the physicality she brought to the role was great, and she even handled the handful of emotional scenes fairly well. There were a few moments where her delivery was not all that great, but for the most part I was thoroughly impressed. The other person of note in this film is Chris Pine as Steve Trevor. He and Diana share a common interest in ending the war, but they have two different ideologies about how to do it, which ultimately makes it interesting to see how it all unfolds. The rest of the characters are all mostly good as well, those are just the two that stood out. The action itself is also really well done. There may be less action in it than most people may think, but when there is action it impresses.
I am Diana of Themyscira, daughter of Hippolyta!
Before tackling some of the film’s negatives I also want to note how the film presents Themyscira (Diana’s home). It could have very easily come across as goofy, but Patty Jenkins and crew do a great job of grounding it in reality while keeping it true to its comic origins. Some of the problems with this film include the effects and aspects of the final confrontation between Diana and Ares.

Destruction becomes the least interesting part of the film.

While the effects were mostly good, there were a handful of scenes where it looked pretty bad. In the first few minutes there is a scene where young Diana leaps off a ledge and it is very clear that she is in front of a green screen. The lasso of truth looked very fake when used in combat as well. As far as the third act, it becomes this overblown mess where I became confused about what Diana’s powers were and what Ares’s powers were. I understand the desire to have her go against a formidable foe such as Ares, but it is the least interesting part of the film. The reveal of Ares’s true identity was underwhelming, and the battle itself was not too impressive. Also, I have to say that the final shot of the film is laughable. Not only does it look very fake but I do not know if she is flying or just leaping.
Closing Remarks
Is a weak third act enough to make this a bad film? No, not at all. I never even mentioned the villains in depth, mainly because they were not awful, just forgettable. What is not forgettable is the film in its entirety. Through the strength of its characters and the powerful message within, this film becomes one of the better comic book adaptations I have seen.