Think long and hard, who is the best director currently working in Hollywood? I am sure plenty of people would say Christopher Nolan. He is not my favorite director, but he is certainly in the conversation when I talk about the best directors. Coming off of something like Interstellar, I really wanted him to give us a great film. Interstellar is fine, but over time I have lost interest in it. With Dunkirk Nolan gives us a new kind of war film, one that has some flaws, but is able to overcome most of them through its expert depiction of war.
Why waste precious tanks when they can pick us off from the air like a fish in a barrel?
Right from the opening shot, this film thrusts you into the action. It may be a bit disorienting at first, but this is what Nolan sought to do. He wants the audience to experience what the soldiers experience. For the first 10-15 minutes there is barely any dialogue, but the film does a fantastic job setting up the stage. The French and English are trying to hold off the Germans who are within the city. The English are on the beaches of Dunkirk trying to evacuate. However, their military is unable to send ships, so they are essentially trapped on the beach. All the while, the German’s are bombing them from the sky, taking them out one by one. As this is unfolding on screen some text appears: “The Mole: 1 Week”. When this first popped up I was very confused, but intrigued. Have the soldiers been there for 1 week? Do they have a week left? I kept trying to figure out what it meant. The film then shifts focus to a small group of civilians who are sailing to Dunkirk so they could help evacuate the soldiers. With this segment the title: “The Sea: 1 Day” popped up. Finally the third segment involved the air force coming in to support those who are trapped on the beaches of Dunkirk. This segment was titled: “The Air: 1 hour”. It is tricky to juggle three different perspective in a film, Nolan takes it a step further. The times included in these titles refer to how long we spend with these people. We spend a whole week with the soldiers at Dunkirk, 1 day with the civilians at sea, and 1 hour with Tom Hardy in the air.

The boys in the sky.

This is a fantastic use of time, because it keeps a fairly straightforward story much more engaging for the audience. As far as the content of each of these stories, I love the fact that we barely know anything about anyone. I imagine if you were in this situation you would not be sitting around trying to get to know your fellow soldiers. Your objective is to make it out alive. While following the soldiers at Dunkirk there are small groups that are formed, but they are formed out of necessity. The characters barely interact with each other, but they stick together to increase their chances of survival. There is no blood or gore during these sequences on the beach, but there is so much tension. Whenever you hear an incoming plane you start to get uneasy because you know these men are unable to fight back. Sure, perhaps you are not fully attached to them, but you just want to see them make it out alive. The segment at sea with the civilians has the most emotion. These characters interact with each other, but you still do not know much about them. When they rescue Cillian Murphy’s character their segment got interesting for me. He becomes such a lost and tragic character, one that you feel sorry for by the end of the film. When he learns that they are sailing towards Dunkirk he goes crazy and ends up killing George. Later on he asks if George is alright, to which the captain’s son says that he is. No amount of blood or gore will convey the tragedy of war compared to how broken his character has become. The final segment is probably the most thrilling: The air force. Flying a plane can already be tense, so how does Nolan make it even more thrilling? Early on Tom Hardy becomes unable to check the status of his fuel. This adds much more tension to his scenes because you keep wondering if he will run out of gas. Of the three segments this one has the most tragic end because eventually his fuel does run out, and before he lands his plane he ends up saving the remaining English men who are at Dunkirk. However, when he lands he is captured by the Germans. A lot of the film’s tension stems from Hans Zimmer’s score. It may seem simplistic at times, but it proved to be very effective. The camerawork is also something that should be noted. Certain shots were beautifully framed, other shots were haunting, while many were thrilling. The camerawork with the airplanes is absolutely fantastic, and does a great job of immersing you into the action.
You can practically see it from here.
It seems like most people take issue with the fact that this film does not allow you to connect to the main characters. I am fine with this because that is the whole point. These are soldiers who are scared and have lost hope. They are trapped on this beach, seemingly doomed to die. Everything that can go wrong for them, is going wrong. Why would they sit around and talk about what awaits them if they survive? Nolan could have had some scenes early on depicting what life was like for them before the war, but somehow this feels more interesting. It is a new take on a war film, and I for one appreciated it. I do have several problems with the film. Much like all of Nolan’s films, I wish the dialogue was more audible. 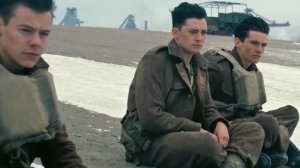 Harry Styles is in this too. He does a good job.

Subtitles would have helped because I could not understand what many of the characters were saying. There are also frequent occasions where a collection of shots that are supposed to happen within the same time frame are shot at different times of the day. This is something that happened in The Dark Knight Rises, and is very distracting. Also, while I like how Cillian Murphy’s character is responsible for George’s death, I did not like how he became blind before dying. It just felt unnecessary, especially considering that he died shortly after. In my opinion it is more tragic that he died, then him becoming blind. Finally, and perhaps my biggest issue with the film, is the convergence of the three segments. Towards the end of the film all three segments begin to converge with one another, which is great. However, I do not believe it was executed as well as it could have been. At this point the soldiers that we have been following on the beach have gotten on this small boat that is beginning to go into the sea. When they meet up with the civilian boat, they are way out into the sea. This is a boat that had bullet holes in it, and was sinking. There is absolutely no way that it made it out that far, nor that quickly. In a film that seeks to portray war as realistically as possible, I found this sequence highly unrealistic. I like the idea of these segment converging with one another, but it should have been handled differently.
Closing Remarks
Early reviews for this film led me to believe that this would be a masterpiece. Then more people starting seeing it and of course there were those who were hating on it. I do not believe this is a masterpiece, but it is a very good film. Not only that but it is an important film about an even that I did not know anything about. I look forward to Nolan’s next film because he has yet to disappoint me.